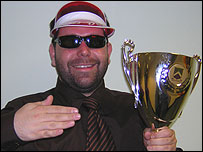 On November 12, 2006, Bob Cooper (left) of London, UK, reached the pinnacle of a sport most people could only dream of conquering. Beating over 500 other competitors, Bob became the World Champion in . . . Rock, Paper, Scissors. The championship is held every year in Toronto, Canada. And before you think that winning RPS requires no skill, take a look at home page of the World RPS Society. With an "RPS Strategy Guide" published by Simon & Schuster and an on-line trainer on the RPS website, participants insist that winning requires highly refined skill. Bob's secret? "Hard work, training and lots of research into tactics, body language and basic psychology," and the reward for displaying that skill? This year's grand prize was the handsome sum of $7,000.
Posted by Bobmo at 6:12 PM